Have you ever tried out your favorite Youtube artist’s secret makeup technique? They swear that it will make you look spectacular and glowing but when you try it, you end up looking more like Pennywise. You can’t help but laugh when this happens but sometimes it gets down right ridiculous. Before you take out your Crayolas, have a look at some of these hilarious makeup tutorials gone wrong.

The mascara wand is like a T-Rex, make any sudden movements and it’s going to suck. Watch her reaction to it afterward. She can’t believe that happened and the shame is priceless. I wonder if she just threw her youtube career down the drain after this?

Notice how she looked almost frightened on the makeup side of her face and happy on the one without makeup. It looks like someone used a wide-tip sharpie instead of eye shadow. Does it hurt at all, to be honest?

-Am I Going To Go Blind-

Did this clip give anyone else flashbacks of Jim Carrey wrapping tape around his face in the movie Liar Liar? Now, I’ll admit that I have bled wet eyeliner into my eye and it sucked but this girl takes it a little too far. You’d think after she got done recording she was going to call 911.

You can tell she takes extra pride in every bit of makeup she puts on, but it’s only because she didn’t pay for it. But don’t worry, as long as you leave the camera on while your sister is murdering you, there will be sufficient evidence to pin on her later.

The best makeup tip is to completely downgrade yourself the entire time you are putting it on. It might not convince you that you did a good job, but at least you won’t fool anyone into thinking you’re good at it. 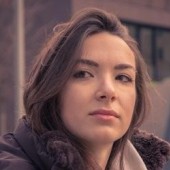 Gemma was born and raised on a farm in rural Washington. You could say that is partly her inspiration for heading down the path to becoming a beauty expert! She is a self-taught lotioncrafter after spending years researching and experimenting with diy cosmetics. Currently she is an avid beauty blogger for Beautisenz.com but in her downtime loves to chill out on the family farm.